Dear all,
given the current status of the COVID-19 pandemic, with great regret we decided to postpone this year's course until June 2023 (courses in Erice are scheduled and planned many years in advance; for this reason, we could not move the school to 2021 or even 2022).
It has not been an easy decision and, although we feel it is the right decision, we are very sorry for all the inconvenience that it may cause. We will reimburse anybody who has already paid the registration fee. If you are interested in participating in the 2023 school, guaranteed pre-registration will be available in July 2022. Check back on the website for further information. Please feel free to reach out to us with any questions.
Sincerely,
Annalisa Guerri
Executive Secretary of the International School of Crystallography

Dear All,
It is with great sadness that I write as Director of the School of Crystallography at Erice to report the death of Lodovico Riva Di Sanseverino on 18 June 2010.

Lodovico died in Trapani after working on the 2010 Course on Crystallography at the Ettore Majorana Foundation and Centre for Scientific Culture, Erice, Italy. We left him in good spirits and looking forward to courses for the next seven years.

As you know Lodovico has been the driving force of the School since 1974. The courses are known for the excellence of their speakers, the liveliness of the participants, the splendour of Erice and for the personality of Lodovico.

At the Erice Courses Lodovico's organisational skills and hard work always made the meetings a success. But his secret was his enthusiasm, the individual attention he paid to all participants and his humour. We all remember his inimitable style as he encouraged us to switch on the microphone, give our name and speak more clearly! We remember his translations of the local songs as we were entertained in san Francisco or san Rocco. And of course we remember his songbook and his ability to sing in so many languages, bringing in participants from all over the world to the Marsala Room. We will miss him a lot.

As you know, Lodovico was a distinguished scholar of Mineralogy and Crystallography and Professor at the University of Bologna, and had made many contributions to crystallography over the years.

Lodovico leaves a wife, Fiorbellina, and a family, and our thoughts are with them in this difficult time.

Paola, Annalisa, John and I will do what we can to continue the courses and we have a schedule till 2017. They will be a fine memorial to Lodovico.

The name of Lodovico Riva di Sanseverino will remain forever associated with the Ericean Schools of Crystallography and with his great skill and success as an organizer but It is important to recall that behind this there was a brilliant career as as crystallographer and as teacher.

Lodovico was born in Palermo on 1939 and in Palermo he spent most of his undergraduate and graduate study career. He Then moved to the University of Florence where, in 1962 he got the degree in Chemistry under the supervision of professor Sacconi, at that time one of the biggest names in the field. Immediately after the graduation in Chemistry he spent a few yeardoing a post doc crystallographic training first in the lab of Prof Caroline Mac Gillavry, at the of University of Amsterdam, and than at the University of Cambridge UK under the guidance of Prof Olga Kennard. He spent many periods over several years there and I remember Frank Allen, who was also in the Olga's group at that time telling that "when they saw Lodovico reappear, they immediately knew that spring was coming"!.

His academic career in Italy started as Assistant professor at the University of Bologna; after a short period spent at the University of Palermo, he went back to Bologna in 1975 as Full Professor in Mineralogy and Crystallography. His scientific work was mainly focused on correlate structure to properties, and at the same time, on deepen current methodologies. In the early seventies Lodovico was part of the first group of enthusiastic users of the Direct Methods in Italy. In Bologna over the years he trained many young researchers now working in several chemistry departments. In the late nineties, a serious glaucoma definitively damaged his eyes and teaching and organization became his main activities.

His love for these three word Crystallography, Teaching and Organization are in fact condensed in this "International School of Crystallography" that you are now experiencing and that he created in the early seventies, welcoming the suggestion of famous crystallographers like Michael Woolfson and Herb Hauptmann who had already the opportunity to recognize the abilities of Lodovico as organizer.

Looking back to the long series of courses he organized, from 1974 up to today, it is impressive to see the effort Lodovico put not only in trying to keep the quality of the science offered to students as high as possible, but also in improving the standard of the local facilities. Being very clear in his mind that "students" and the teachers can more easily learn and teach if they are happy, he put great care in planning the so called "social events", and in creating a friendly and warm atmosphere among participants aimed to help younger students to interact easily with senior scientists.

The main pride of Lodovico was to be able to cite a long list of scientists who started their career as "students" in Erice and later became "big bosses" of well renowned crystallographic labs, thanks the links established in Erice. And he was also particularly proud of the fact that 15 Nobel Laureates were invited to contribute to the Courses before receiving their prestigious award. The success of the courses and the great work of Lodovico were officially recognized by the crystallographic community in 2005, when, during the banquet of the XX IUCr Congress in Florence, he was awarded by the Union a prize for his "Exceptional Service to Crystallography" and for his organization of the Erice schools. 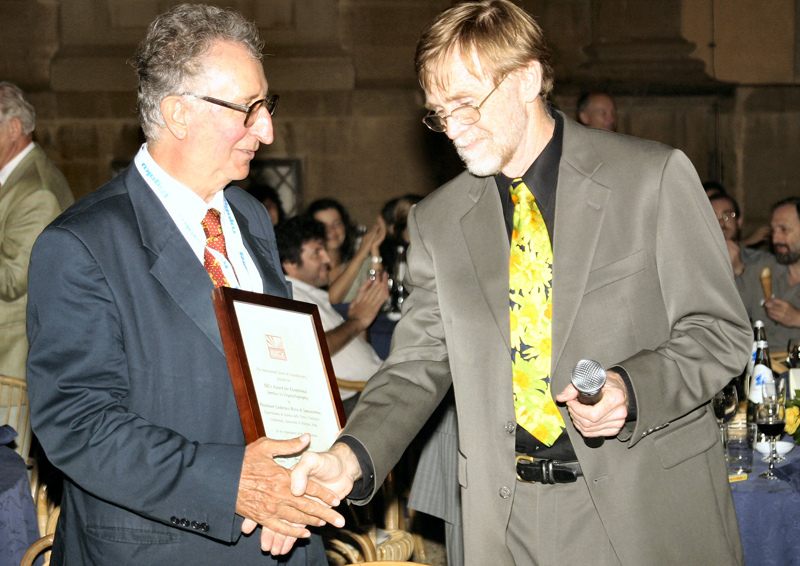 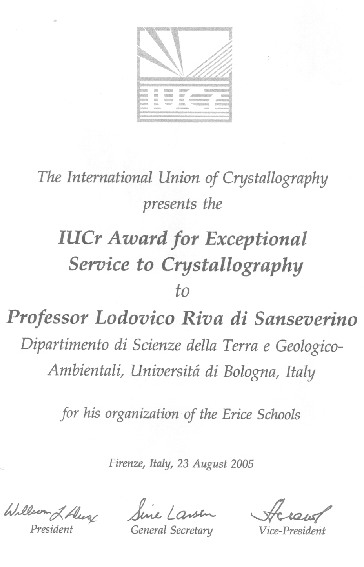