Dear all,
given the current status of the COVID-19 pandemic, with great regret we decided to postpone this year's course until June 2023 (courses in Erice are scheduled and planned many years in advance; for this reason, we could not move the school to 2021 or even 2022).
It has not been an easy decision and, although we feel it is the right decision, we are very sorry for all the inconvenience that it may cause. We will reimburse anybody who has already paid the registration fee. If you are interested in participating in the 2023 school, guaranteed pre-registration will be available in July 2022. Check back on the website for further information. Please feel free to reach out to us with any questions.
Sincerely,
Annalisa Guerri
Executive Secretary of the International School of Crystallography

This page, as you can read below, has been made by Gianni Grassi, the webmaster of crystalerice.org until 2015. Unfortunately in 2015 he died and I decided to keep this page almost like he did it, to honour his memory and his work. 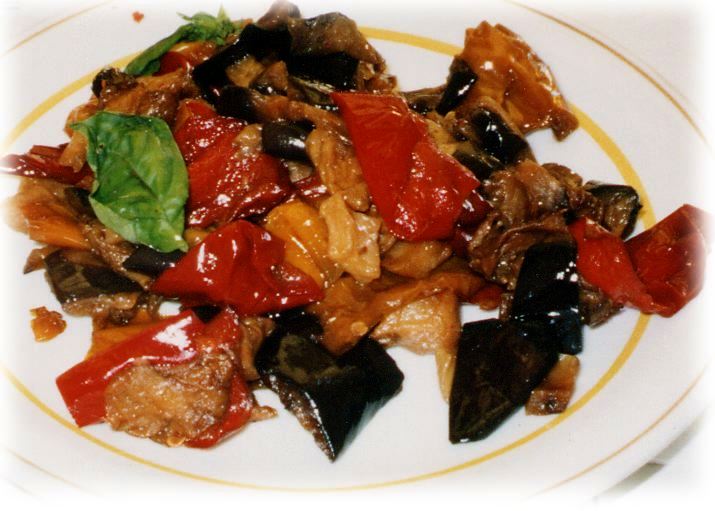 Lodovico's list of recipes, included only after
having been repeteadly requested

Note the several humorous links to images, added by
Gianni Grassi,
the super-active webmaster who looks after the efficiency
of most of these web pages

Cut eggplants in blockets - one inch square surface - and mix them with salt…let them for some time under pressure, e.g. an heavy dish, in a way so that they loose liquid. Slice the onions and fry them gently until brownish, cover them with the tomato filets, add pieces of fresh celery, capers and olives. Cook at length. Separately fry the eggplants after carefully drying them. When brownish, add them with the vinegar to the tomatoes and cook gently at length. When the vinegar is volatilized, mix the preparation with basil leaves, dried sweet grape and pine-nuts. Serve when cool.

This kind of pasta, shaped alike a ring for your finger, is quite difficult to be found, specially outside the Palermo-Trapani environment. Try to find any other kind which is easy to be placed in layers AND be able to "incorporate" some sauce within each individual (i.e. lasagne is not advisable). Indeed, the "thick" tomato sauce described here below should deposit within the little hole of each anelletto.

Prepare an abundant thick tomato sauce with heavy flavour of basil. The "heavy" consistency is achieved by gently frying the onions with abundant carrots, always cut as small as possible. The sauce is ready when you are no longer able to distinguish pieces of onion, or carrot, or tomato…. Big samples of basil may finally be extracted if they were joined to the sauce as such (i.e. they will not "disappear")

Fry round, ½ inch thick or even just thinner, slices of eggplants, so that they are almost hard at the end. The slices should be treated with salt previously, so that much liquid is expelled.
The floor of a baking-pan is covered with a thin layer of tomato sauce. The boiled anelletti (they should not be cooked till normal taste but left slightly uncooked) are thrown as a first thin layer and then covered with the fried eggplant slices which form a second layer. A third layer, of anelletti, is covered with thin slices of "primo sale" (or any cheese which comes from pure or mixed sheep milk ). Another layer of anelletti is followed by another layer of fried eggplants and so on until you do no longer dispose of the anelletti or the eggplant slices or the cheese. The stuff in the baking-pan should be continuously pushed down to fill voids… After baking in the oven, you obtain the anelletti in the form of cake….Serve five minutes after taking it out from oven.

Fry slowly and gently bacon with enough meat, onions, carrots previously cut in small cubes…. until brownish. Add a reasonable amount of sausage meat and keep cooking until each component has disappeared…. Add now the mushrooms, originally dry, but left previously in water so that they loose eventual grains (always present in dried mushrooms). If the mushrooms appear too big, cut them in smaller pieces before mixing them in the pan (i.e. is not pleasant to find yourself to manage a large piece of mushroom in your mouth). Let the mix cook at length adding eventually the water flavoured by the dried mushrooms. Add during the last five minutes white wine; its quantity should not destroy the mushroom flavour......

Boil the rice - advertized as resisting to double cooking - and when almost ready, dry it, mix with butter and parmisan cheese. Throw the prepared rice into a baking pan after paving it with butter and then bread crumble. The white rice should fill about 2/3 of the pan, building up side walls so that the sauce, previously prepared, is layered down homogenously to make a significant brownish layer, covered with the remaining reduced quantity of rice… The liquid part of the sauce should slowly enter the underlying rice, disorderly, so that the white rice is randomly infiltrated by brownish lines…
Bake reasonably, hopefully obtaining a golden surface produced by the bread crumble, which should ease either the getting out, in reverse, of the prepared cake, or, if you use a baking pan with removable walls, the reversing operation becomes still easier.

Prepare "pasta frolla" ( = short or basic crust pastry) sufficient to pave the floor of a baking-pan and its side wall, preferably smoothly inclined to the exterior (similarly to \ ==== /). Be sure to have additional pastry to squeeze a thin layer to cover the baking-pan after filling. "Pasta frolla" is prepared as follows:

Mix 300 gr. flour, 150 gr sugar, 150 gr butter, two yolks and one full egg, vanillin, and thin skin of a "young" lemon (grating delicately the surface of a freshly collected lemon), half a glass of marsala, or port, or red sweet vermouth, up to the point to have a quite homogenous paste, a near as possible in the shape of a sphere. It will be useful to cool it so that it becomes a hard ball, in the fridge, where can be kept even for days. Some "specialists" advice to avoid hands to mix the components, by using large knives or similar tools until reaching quasi-homogeneity

Fry slowly in a pan, some bacon which should provide the meat component for the sauce, onions, carrots and much much celery, all cut into small cubes. When brownish, add much tomato in pieces or even tomato sauce (follow your taste!), and let cook slowly for a long time. Ideally, no component of the sauce should be distinguished. To add a clear savour to the sauce let the sauce boil slowly with a big bunch of celery which should be taken away before mixing with macaroni. Some humans dislike an intense celery flavour, so be careful.

Mix this sauce to the boiled macaroni type pasta (ideally "pennette" or "ditali") when not yet definitely cooked (i.e. the final, proper cooking will be achieved later by contact with the hot sauce and later in the oven). When cold, the macaroni should be thrown into the previously prepared and laid down "pasta frolla", onto the baking-pan.
.
The macaroni are well pushed within the cage and covered with a thin sheet of the prepared "pasta frolla".
Cook in the oven for enough time (at least twenty minutes) to cook the pastry. Serve 5 mins after exit of the pan from the oven. Choose a pan with easily detachable walls, so that only the bottom goes on the dish at the serving table
PS : one may wonder which detail modifies the Ferrara recipe. In Ferrara the macaroni are accompanied by a "white" sauce, mainly besciamelle, cooked ham and soft cheese….Here there is a "red" sauce, at your liking flavoured with more or less celery "contrasting" the sweet pastry (a weak attempt at "sweet & sour". Conversely, see the Ferrara original recipe, the contrast is not sensed when the "white" sauce accompanies the macaroni..

Meat-balls Lodovico's way
The slight, essential difference with the meat-balls preparation you have always known consists in adding to the mix a reasonable number of little pepper cubes, obtained by slightly frying them, cut from red, yellow and green peppers. The varied colour appeals to the eyes, while the strikingly different flavour helps - to Lodovico's quite personal taste - pleasure while eating meatballs.

Eggplants Parmisan way
Cut the eggplants perpendicularly to their elongation (i.e. round eggplants are not advisable!) in roundish slices, and place them on towel throwing a bit of thin salt on their surface (or else, place them in a container with holes and alternate layers of them with little thin salt, pushing them down with some weight). They should loose some liquid (mainly water). Fry them gently (not completely...). In the mean time, prepare(or buy) a tasty tomato sauce and cut thin slices of flavoured cheese (e.g. Edam). Then form layers of fried eggplants, wettened with tomato sauce and covered by a reasonable number of thin slices of cheese. Add layers until you fill a rather large pan and exaust the quantity of eggplant slices, cheese and tomato sauce; cook in an oven at medium temperature. You will smell the moment they are OK.

Sicilian CASSATA (beware, it is a dessert cake, NOT an icecream), version Lodovico (see image below, and more by clicking here)

Have a sponge cake available (buy in the shop or see below), 1 kg ricotta cheese (possibly from sheep), ½ kg sugar, a good tablet (up to 200 gr) of pure chocolate (no milk chocolate !) and a reasonable amount of thin orange skin, previously boiled couple of times, and a third time with a spoon of sugar. Cut the surplus white support for the orange skin.

Mix the ricotta with the sugar and leave it for 24 hours. Then put the lot through a sieve to obtain a paste without discontinuities or little lumps. Separate 1/10 of this pastry (it will be used later) from the main amount. Cut both the orange skin and the chocolate in small pieces and mix with the 9/10 of the ricotta pastry so that you see a reasonable number of brown and orange bits alternating here and there within the white pastry.

Cut the obtained sponge horizontally in three large round slices; cover one of them with the obtained ricotta mix. Build the wall of the cake by circling it by 4cm wide strips obtained from a second horizontal slice of the sponge. Complete filling up to level with the 9/10 ricotta pastry and cover with the third round slice of sponge, whose diameter should be reduced in comparison with the base of the cake so that the side slice should converge (i.e. it does not stand vertical…but inclined (similarly to /==== \) to the top of the cake. Cover the top and the wall with a thin layer of the (left aside) white 1/10 ricotta mix and add colour candied fruit (aligning, for example, thin "hair" of the orange skin on the side wall) to your liking to both top and side of the cake. In the traditional version the side of the cake is greenish, consisting of coloured almond pastry, reputed to add sweetness and rich, stodgy food without any relation with the ricotta flavour.

Have four eggs and the weight of three of them (approx 200 gr.) in flour and in sugar.
Have 50 gr of baking powder. Mix eggs and sugar, very well, and join gently flour and baking powder. Lay the whole mixture in a Baking-tin at about 180°C for 35 mins. 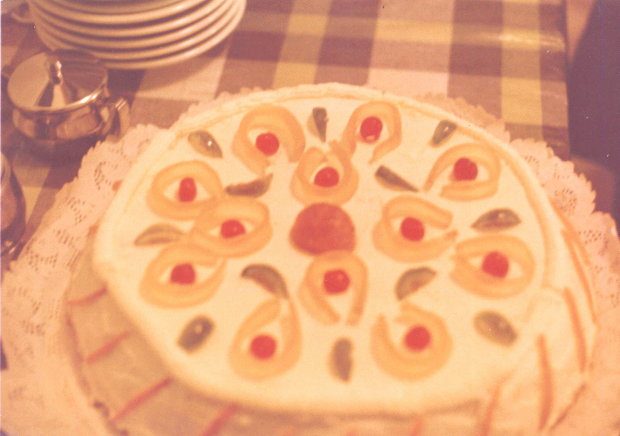 Apologies for the bad quality of this photo, taken when the team of local organizers prepared a dinner for the personnel working
at the Majorana Centre (until the early eighties). An additional series of images - showing cakes prepared by Lodovico - is available.